The Łódzkie (Łódź) voivodship, (polish; Województwo łódzkie) is located in the very heart of Poland, in the centre of the country, with a population of 2,6 million people. It occupies an area of 18.000 square km and the capital of the voivodship (region) is the city of Łódź being the second largest in Poland after Warsaw, (the capital of Poland).

The region lies in the belt of Middle-Polish Lowlands, between the rivers Vistula and Odra.where the river Bzura and Pilica are located, both flow into the Vistula, with the Prosna, Ner and Widawka flowing into the Odra.

Associated with the textile industry which developed at the turn of the 20th century. The province has 42 towns  and about 5,100 villages divided into 20 rural powiats and 3 town districts. Together with the neighbouring places, Zgierz, Pabianice, Konstantynów Łódzki and Aleksandrów Łódzki the city of Łódź includes nearly one million inhabitants, and is a large economic, commercial, scientific, academic and cultural centre within Poland. 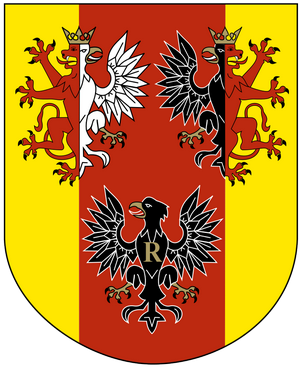 The province once belonged to Mazovia with the separatist Łowicz Duchy and to the Sieradz and Łeczyca Lands. The city dates back to 1332, then just a small settlement but around 1820 the Congress Kingdom of Poland, the government, realised the towns advantageous position and made it into a new textile centre. Polish, Germans and Jews built new textile mills which employed thousands of workers. At the outbreak of World War I the city had expanded to a population of half a million.

Some of the benefits of living in, and the future potential of the voivodship are due to it's geographical location and the achieved social and economic development that has recently taken place. The region has good transport corridors between Berlin, Warsaw, Moscow and Gdańsk as well as Warsaw to Vienna which run through the voivodship Łódź connecting it with Europe and the rest of Poland. The recent construction of the A2 (east to west) highway is now nearly completed, while the course of the A1 (north to south) highway has already been established. The junctions of the A1 and A2 combined with a system of normal domestic roads help to make this voivodship into a European traffic route for the future.

Already, there are modern  logistic centres  operating around the areas of Łódź, Tomaszów Mazowiecki, Piotrkow Trybunalski, Kutno, Strykow and Zgierz. Some of the well known operators include, Raben, IKEA, KERAKOLL, Graveleau, Casino and LEK. The city of Łódź has its own passenger airport Lublinek, which is under constant redevelopment and now handling many international flights. The future growth of Łódź is closely related to international transport, which will utilize the Łódź Olechów container terminal and the planned  A1 highway. The city of Kutno is also getting ready to open an international container terminal joining road and railway transport. With the planned construction of a high speed railway line to the capital, Warsaw which will provide Łódź with a better link to the international high speed rail network.

The economy of the region is made up of agricultural and industrial elements. Some of the important areas of industry include; energy, food processing and beverages as well as: medical equipment, clothing and textiles, pharmaceuticals and the production of household appliances.

As much as 70% of the domestic production of ceramic tiles and terracotta is manufactured in the voivodship. Bełchatów has the largest fuel and energy complex to be found any where in Europe, producing electricity from brown coal. With further large financial investments committed this will increase the output of the complex going forward.

The region is also characterized by a high level of skills from the workforce and entrepreneurship. As many as 208,000 of the population possess higher education. With a good supply of labour that has a low gross pay in the sector of enterprises, which on average equals 1977 PLN while the national average for the country is 2480 PLN. Both these aspects mean that there are ample possibilities to employ well qualified and  low cost personnel.

There are approximately 245,000 economic entities, out of which there are over 97% that belong to the private sector. The sectors of SMEs and services are being rapidly developed. Łódź is also a location for the telecommunication companies of Poland such as: Telekomunikacja Polska and GSM, which have their call centres here. Such companies as Philips, Bosch-Siemens, Merloni, Süd Wolle, ABB, Amcor, Coca Cola, Gillette, SAPA, Shell, Coats, Continental Can Europe, Nijhof Wassink, Scania Polska, IKEA, Knauf have invested in the region and it is here that Philips Lighting has its European Centre for research on the development of light sources. Furthermore its to this region that Philips relocated its accounting centre, originally in Dublin, Ireland, whereas Merloni has created an accounting centre that covers East Europe.

The city of Łódź has many types of companies, which create a prosperous business environment, for example; Aleja Kościuszki is known as the street on which or at the vicinity of there are branches of the some of largest banks that operate within Poland. The city centre is known for legal, economic and attorney at law offices. The honorary consuls of Austria, Germany, Great Britain, Denmark, France, Latvia and Hungary reside in the city of Łódź.

Some thirty trade fair events are organized annually attracting exhibitors and the public from all over Poland as well as from other countries. Some of the most important include; “Intertelecom” Trade Fair, “Yarn Market” and “Interbud” – International Building Industry Fair.

Food production and processing are an important element of the economy of the region. The Sieradz area is known for its cereals and potatoes, supplying the central and northern parts of Poland. The fertile soil between Łowicz and Łęczyca is famous for the production of vegetables including; onions and carrots, as well as soft fruit: currants, strawberries and raspberries. The south western part of the region specializes in orchards and the growing of vegetables. The good taste and high quality of the fruits including fruit juice, vegetables and the preserves produced from them are known throughout Europe, and are exported especially to Poland's closest neighbours the Germans.

A factor guaranteeing long-term development of the voivodship is that the capital of the region has a strong academic and cultural tradition. Good educational centres with state universities such as the University of Łódź, the Technical University of Łódź, the Medical University, the Academy of Fine Art, the Music Academy, the National Film, Television and Theatre School, as well as other private universities. During the academic year 2003/2004 the universities in Łódź had as many as 120,000 students. The scientific and research facilities are very evident in the universities as well as independent research units and institutes like the European Institute, Centre of Molecular and Macromolecular Studies of the Polish Academy of Sciences, the Institute of Occupational Medicine, Institute for Nuclear Studies, the Institute of Technical Textiles “MORATEX”, are partners for the industry in implementing modern technology, innovation and training of personnel.

State and private universities as well as their branches operate in many of the bigger cities throughout region. Others include the Institute of Pomology (is a branch of botany that studies and cultivates fruit) and Floriculture (flower farming) in Skierniewice.

The Department of English at Łódź University  promotes English culture. The British library is a place where English speakers and the inhabitants of Łódź known as the Anglophiles meet. The English language is one of the most frequently heard foreign languages on the streets of Łódź and is very popular amongst young people.

If you are a fan of  contemporary art you should go to the Modern Art Museum in Łódź. As a tourist you may also want to see a performance at the Grand Theatre or in one of the dramatic theatres: St. Jaracza Theatre, Teatr Nowy, Teatr Powszechny. Connoisseurs of classical music know that Artur Rubinsteina was born and grew up in the city of Łódź.

A number of cultural events are held in the region every year such as the Camerimage Festival, (the International Film Festival of the Art of Cinematography is the greatest and most recognized festival dedicated to the art of cinematography and its creators). The popular Festival of the Dialogue of the Four Cultures reflecting the multi-national roots of city.

A well known street nationally is; Piotrkowska street, with its unique atmosphere with its pubs and restaurants a local meeting point for the people of the city and visitors alike.

Throughout the region there are many cinemas, community centres, art exhibitions, galleries and clubs that provide a range of amusement and cultural activities.

In the Łódź voivodship there is also golf courses, horse riding, cycling and hiking trails passing through some of the most beautiful scenery of the region. For those that like to visit historical locations there are interesting relics of Romanesque, Gothic, Renaissance, baroque, art nouveau architecture. Łódź use to be called the “Polish Manchester” due to the many buildings resembling the nineteen century English factory architecture.

The Łódzkie region has every type of accommodation available from simple rooms to the grand hotels and everything in between.

One of the delights of travelling is to sample the food of the part of the world you are visiting. Łódzkie will not be a disappointment to your palette.

Have confidence in your leaders and submit to their authority, because they keep watch over you as those who must give an account. Do this so that their work will be a joy, not a burden, for that would be of no benefit to you. — Hebrews 13:17 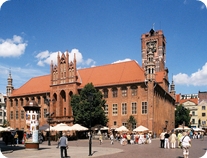