From the south of Poland in the Tatra Mountains stretching along eastwards to the Ukrainian border you can discover  Poland's Wooden Churches in the rural uplands. These early places of worship were built sometime between the 15th and 19th centuries and are now UNESCO protected buildings.  These wooden churches are among Poland's most remarkable architectural heritage.

Local landowners in southern Poland who wanted to build a church realised that using wood, which was plentiful in the mountains, rather than stone had a number of advantages such as it being cheaper and quicker to build as wood is lighter than stone and carpenters could erect a good sized church in less time than stonemasons.

Many of the churches were made from the resilient Larch tree, which when dried is a very strong building material, but there are others constructed using trees such as pine, yew, oak, spruce and beech.

One of the best examples is to be found at Haczów, a village in Brzozów County, which boasts the world's largest timber Gothic church, Church of the Assumption of Holy Mary and St. Michael the Archangel, the oldest wooden Gothic temple in Europe, 1388. You can see others in; Dębno, a town in Myślibórz County, St. Michael the Archangel Church in from the 15th century. Also at Muszyna, Binarowa, Blizne, Lipnica Murowana and the Church of St. Phillip and St. Jacob in Sękowa dating back to 1520.

Within the province of Malopolska you can explore the Wooden church trail extending for about 1,500 km or 930 miles which links from one building to the next.

Have confidence in your leaders and submit to their authority, because they keep watch over you as those who must give an account. Do this so that their work will be a joy, not a burden, for that would be of no benefit to you. - Hebrews 13:17 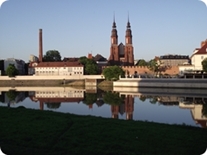