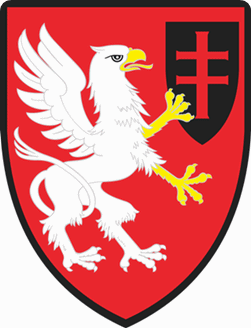 Miechów Travel Guide - a travel Guide to Miechów, a place in southern Poland in the province of Małopolska. The Municipality and town of Miechów are located in the Miechowska Uplands about 34 km (about 21 miles) north of the regional capital of Krakow on the national road No.7, in the region of Lesser Poland Voivodeship.

An important local personage was Maciej of Miechów, who held a number of rolls such as a doctor of medicine, canon, astrologist and historian. He was elected eight times as the Rector of the Academy of Krakow.

The town is situated in a rural area and agriculture plays a major part in the life of Miechów.

This guide is a travel Guide including accommodation about the country of Polska which is located in central Europe. You are very welcome to visit my site and I hope that you will enjoy the experience.

My guide is easy to use as each village, town and city has it's own page with useful information for the visitor. Not all sections appearing on the left of my guide, on Miechów may have information as this is an ongoing project.

You will find the full range of accommodation in Miechów from the most luxurious five star hotels with up to date and modern amenities to pensions (a type of guest house or boarding house) and rooms or apartments at very reasonable prices. Some of the larger towns and cities will also have hostels.

If you prefer your accommodation in a more rural location there are a number of “Agro” style places on farms and in the countryside plus there may be camp sites nearby.

If you see something you like or wish to know more about please contact the accommodation provider directly.

If you wish to advertise your accommodation in Miechów Travel Guide or this website please contact me.

The Inn chose to locate their building on ground near the route E7 because of the ease of travel and the short distance to the town centre. According to the owner the area is quiet with nearby shops, swimming pool, a park and tennis courts. Their website is in Polish.

There are three nature reserves within reach including: “Lipny Dół” in the vicinity of Książ Wielki, “Biała Góra” in Tunel, and “Złota Góra” near the village of Jaksice.

Poland is a country with a large variety of landscapes, a place where you can experience all four seasons. This provides the visitor with many opportunities for adventure and different activities, whether you enjoy the mountains, lakes, rivers or the beaches you will find something that suits you.

If you see something you like or wish to know more about please contact the activity provider directly as I do not take commission and I take the attitude that their own website will have more up to date details on what they offer than if I were to include it here.

This activity may just be the right one for you. 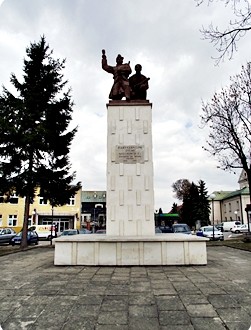 Poland is a country with a large variety of attractions for the tourist to visit, a place where you can experience all sorts of places to see. This provides the visitor with many opportunities for learning about the country, whether you enjoy the many monuments, historic churches or buildings, history of places, or more modern attractions, you will find something that suits you.

If you see something you like on Miechów Travel Guide or you wish to know more about the it contact the attraction provider directly.

Miechów has many attractions for you to enjoy.

As early as the Palaeolithic period, (30-15 thousand years ago) in the land of Miechów man initially led a nomadic life, but it is thought that in the Neolithic period (5400 BC) he settled here permanently, growing crops and raising domestic animals. However, there is evidence that this area was part of the Roman Empire, due to numerous archaeological finds and objects of Roman origin, such as coins, tools, weapons, or ornaments.

After the period of attacks by the Huns and Avars following the great pilgrimage of peoples in the seventh century, this region developed into a pre-polska culture, which led to the formation of Polish tribes.

In the mid-ninth century, the land was part of the tribal state, Miechów Wislanie and by the end of the first millennium was occupied by the Piast princes eventually becoming part of the Polish state.

The owner of the area that would one day become Miechów, a small settlement, and was on the coat of arms, was Griffin Jaksa a Pomeranian Duke who was related to the one of the largest Polish families at that time. Jaksa Agapii his daughter was married to Peter Wlostowic, a Palatine prince. The beginning of the town of Miechow most likely dates back to 1163 at the time of the monks called the guardians of the Holy Sepulchre Bożogrobcami. Jaksa gave to them the town of Miechow and also the villages, Wielkozagórze and Comoros.

The first cannon was thought to be a Martin Galus of French descent, who along with several brothers, after approval by Krakow's Bishop, Matthew began building the first church and monastery, being dedicated in 1170 by the then Bishop of Cracow, Gedkę. The village grew around the monastery and civic rights was granted in 1290 by Premysl II.

Despite a favourable location, between two intersecting routes the economic development of the area faced several disasters. Over the following centuries, 1379-1629 Miechów was burned nine times (usually with the monastery) as a result of battles between various kings and rulers. Despite this, the town grew and by the end of the fifteenth century there were 70 houses and 16 farms.

In 1457 Maciej Miechowita was born in Miechow, who became one of the towns most famous inhabitants. Maciej Miechowita became a priest, doctor, astrologer, historian and geographer, multiple rector of the Cracow Academy, author of the famous “Treaty of two sarmacjach”. Maciej from Miechow was also the author of the first Polish printed medical books written under the imminent threat of an epidemic, they were: “Specific provisions for safeguarding against dangerous plague”

During 1525 there was a great expansion of the monastery with the construction of a new Chapel of the Holy Sepulchre of Jerusalem, a copy of the tomb. It became a place of pilgrimage not only by ordinary pilgrims but also all the contemporary crowned heads of Europe.

From 1624, the town had a wooden hall in the market square, as well as a shelter for the infirm and the elderly which was run by the brothers from the monastery.

In 1732, there was another fire that burned the monastery and some important books. Despite many plagues (and fires) Miechów continued to grow and by 1790, there were 1373 people living in 160 homes.

In a Survey carried out in the years 1790-1792 it indicated there was a population of 195 artisans in Miechów with different professional specialities such as woodcarvers, barbers, bookbinders, teachers, doctors, writers, caretakers and trumpeters.

Polska is full of history and the Polish are great lovers of knowledge of the past so as a tourist you will find many museums throughout the nation.

Some of the museums shown below may have an article about them here on our guide. Follow the link for the article. For the rest, if you see something you like or wish to know more about please contact the museum directly.

What ever museum you run, if you wish to advertise it on Miechów Travel Guide or elsewhere on this website at no cost please get in touch with me.

Museum of the Earth Miechowska - A local museum in Miechów that has accumulated archaeological, historical and ethnographic items from the powiat (county) Miechów. The museum is a complex of buildings post-monastery at the basilica of the Holy Sepulchre, located at ul. Warszawska 1, the so-called, Castle General.

Places to Eat in Miechów

If you wish to advertise your place to eat on Miechów Travel Guide or elsewhere on this guide please contact me.

Miechów may have the right place to eat for your pallet.

Tourist organisations are welcome to contact me for details on how to display their information on the site.

PTTK - Polish Tourist and Sightseeing Society is a non-profit organisation that you will find in many places in Poland.

Buses leave for Krakow, 42 km, frequently using a number of operators and the journey is between 40 and 50 minuets. There is a fast bus to Warsaw, 260 km, which takes about 5 hours.

The nearest railway station is at Miechów on the route connecting Kraków with Warsaw. Krakow takes about 50 minuets and Warsaw just over 5 hours or about 3 hours by intercity Trains.

Here are some useful websites to help you find your way to Miechów. 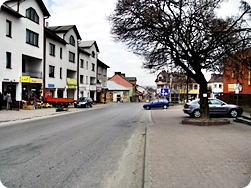 If you have a website that is an official one linked to Miechów, or you administer a local community or an important trade site please let me know as I may be interested in including it.

The Małopolska Voivodship (Little Poland) was created in 1989 and is located in the south of Poland.

The cities, towns and villages of the region of Małopolska. 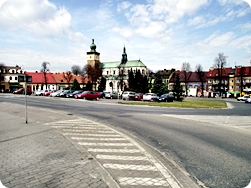 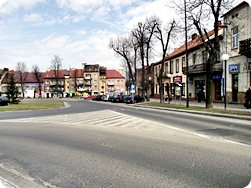 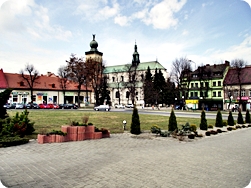 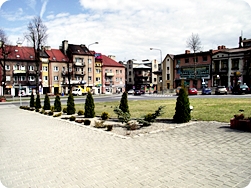 Jesus Christ is the same yesterday and today and forever. — Hebrews 13:8