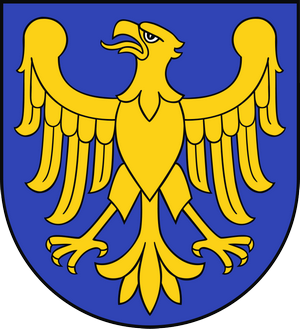 Śląskie Voivodeship, Silesian Province, or by its Polish name of województwo śląskie, is situated in the southern part of Poland. The region neighbours with the following voivodeships: Opolskie, Łódzkie, Świętokrzyskie and Małopolska and it borders with the Czech and Slovak Republic on the south. Within 600 km from Katowice, (the capital of the region) there are six European capital cities: Warsaw, Prague, Bratislava, Vienna, Budapest and Berlin.

Almost 79% of the population inhabits the region’s 71 towns and about 2,100 villages. The Śląskie region is 14th in Poland in terms of area occupied and 2nd in terms of the overall population per region. Within this relatively small area, covering 12,300 sq km, 3,9% of Poland’s territory, there are 4,900,000 inhabitants, 12,3% of the total population in the country, making it the highest population density in Poland at 382 people/km2 versus 122 people/km2 for the whole of Poland and 116 people/km2 in the EU.

Important railway routes, heading north-south and east-west, of which the three main railway lines are a part of the international “E” (AGC) network:

The railway junction at Tarnowskie Góry is one of the biggest in Europe, and of considerable significance to the region. It is the Central Coal Trunk Line that enables fast transport links between Bielsko, Katowice and Warsaw, as well as the Port Trunk Line between Katowice and Gdynia, where much of the goods manufactured within the Voivodeship are transported through.

As a result of the Central Coal Trunk Line, the journey by Intercity between Katowice and Warsaw can take as little as 2 hrs and 40 min. The length of the railway network within the region is about 1,400 km.

The municipal transport network in the Śląskie Voivodeship is amongst the most developed to be found in Poland, with over a 20% share in the length of the transport lines throughout Poland, the region bosts 363 km of the tram tracks, whereas in the Łódzkie Voivodeship, there are 207 km and in Mazowieckie 241km.

As for the roads, the ‘Highway Through Route' (DTŚ) is one of the most important road investment schemes in the Upper-Silesian area of the region. DTŚ will run from Katowice, through Chorzów, Świętochłowice, Ruda Śląska, Zabrze to Gliwice. The DTŚ is an inter-town route, “a municipal motorway” for the region.

The International Airport in Pyrzowice, near to Katowice and the vicinity of two other international airports at Balice near to Krakow and in Ostrava, Czech Republic provide good air links to the rest of the world. Katowice International Airport has direct international connections with, Frankfurt and Düsseldorf which offer hubs via these airports to practically any where in the world. Other places served include: Dortmund, Dublin, Cologne, London, Milan, Paris and Rome. The airport in Katowice is experiencing growth in passenger traffic year on year. In 1996 it was about 68,000 per annum, in 2005 it had grown to 1,023,500 passengers.

The Śląskie Voivodeship is an important industrial region, due to its unique economic position. Since 2002, the “Katowice” International Airport has been the first largest freight transport regional airport in Poland.

Such a large concentration of the population in a relatively small area provides a potential sales market for consumable goods. It is the Upper-Silesian Agglomeration that makes the region specific. It is the complex of towns, adjacent to one another and spanning for over 70 km from Dabrowa Górnicza to Gliwice. It covers about 18% of the Voivodeship’s area 1,200 sq. km. It is inhabited by almost 60% of the region’s population, 2,8 million people. The average population density is over 1,900 people/sq. km. and is almost 5 times higher than the regional rate.

The administration, schools of higher education and the larger companies are mostly concentrated in the bigger towns, such as: Katowice, Sosnowiec, Bytom, Gliwice, Zabrze, Tychy and Chorzów.

A significant role is also played by other capitals of sub-regions: Rybnik, Bielsko-Biała and Częstochowa.

The Śląskie region is a diversified area. Apart from well-developed industry, there are also a number of agricultural areas and natural landscape places of interest together with the important sites of religious worship, enabling the growth of tourism.

At Częstochowa, in the Pauline Fathers’ monastery on Jasna Góra that beats “the heart of the nation”. The Sanctuary with its Picture of the Black Madonna is visited every year by almost five million pilgrims from the whole world.

The mountain ranges of the Beskid Śląski and Żywiecki as well as the areas of Jura Krakowsko-Częstochowska are important places for tourism, both in winter and summer.

The Pszczyna Dukes’ Castle, with its charming palace and park complex, the medieval ruins of defensive castles on the “Route of Eagle Nests” are famous places to visit on the long lists of castles and palaces, once functioning as defensive or representative sites. In Silesia, there are also rare and unique historical monuments waiting for the visitor to experience.

See the underground flow of vessels along the corridors of the Historical Silver-Mine and the Black Trout Drift in Tarnowskie Góry, or the “Queen Louise” Heritage Park in Zabrze, or the Brewery Museum in Tychy which are worth-seeing.

This is what the LORD says: “Cursed is the one who trusts in man, who draws strength from mere flesh and whose heart turns away from the LORD. — Jeremiah 17:5